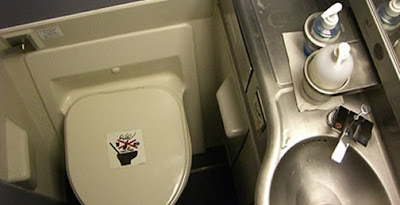 Don't use airplane bathrooms. If you have to, then use them right as you get on. They are cleaner at that moment than at any other moment and probably a little more hygienic too. I know it can't always be avoided, but should if possible. As I stood in the bathroom today and listened to the sticky noise as my shoes caught on whatever disgusting cesspool of disease and germ and filth was there, I was taken back to Cambodia and our boat ride from Siem Reap to Phnom Phen. Awesome experience. Would recommend the trip to anyone at least once, but the one tiny bathroom on that speedboat for the approx 100 passengers for 6 hours was insufficient and disgusting to say the least. Of course there was no toilet paper - there never is in Asia, but that wasn't the bad part. No sink, so no hand washing or even water to make you feel better. Also, imagine any airplane, sporting arena, basically the grossest bathroom you've ever been in and multiply the gross factor by about a billion and you'd be getting close. The smell the filth it was tangible.
I was having tummy issues, so I had to frequent that smelly little room more than I would like to mention during our trip, but I was smart and brought toilet paper. I also could hold my breath long enough to last through most of my trips in and I had hand sanitized in my bag for as soon as I came out.
The real story here is my friend Jamie. She's a little of a germaphobe - had to be she's a Dalton and it's in the DNA. Anyway, I can't remember the exact why, but she went in there with no shoes on... I'm not kidding NO shoes. I think she had come in from being on top of the boat and left her shoes outside. She had to make a decision whether she wanted to go in without them or go back up the scary ladder thing to retrieve them. I don’t think I would have gone in without shoes and I’m a pretty tough girl, but remembering that bathroom can almost make me gag. Jamie said when it came to that point she was trying to prove to herself she could do it (and I think she really had to use the bathroom). Now, I'm not a doctor, but I do know lots of stuff can come through the thick skin on your feet and I don't think somebody could have paid me enough to do that.
Not sure what she gained except possibly some really nasty bacteria or virus or worse, and a really cool story that not many can trump, but she did move up a notch in the tuff girl book – that was gutsy!!!

Posted by Tiffany Sommer at 4:20 PM